***Presales of #Earl #Rallytime cones have ended as of 6/10/22.  Starting the week of June 13th, stop at Stoltzfus Farm Service in Cochranville to purchase your #Earl.

Purchase your  18" #Earl Rally Cone here to show your support for Mason & his journey.  Display at your home, business, or any other prominent location to remind Mason that we are all behind him in this journey.

Stoltzfus' Farm Services, 1043 Gap Newport Pike in Cochranville will also have #Earl's available for purchase during their normal business hours.

**DUE TO THE IMMEDIATE AND UNQUESTIONNING SUPPORT OF BOTH STOLTZFUS FARM SERVICES & THE TRIPLE PLAY BARN, 100% OF THE MONEY YOU PAY FOR YOUR #EARL RALLY CONE GOES DIRECTLY TO THE ELLINGSWORTH FAMILY.   THANK YOU TO BOTH OF THESE LOCAL BUSINESSES!**

If you are outside the  area and need to arrange delivery, please contact us directly.    THANK YOU FOR RALLYING BEHIND MASON- THE OCTORARA COMMUNITY AND THE SURROUNDING SCHOOL, SPORTS, AND FARMING COMMUNITIES ARE AMAZING!

CLICK the links below to be taken to other fundraisers that are supporting Mason & the Ellingsworth family: 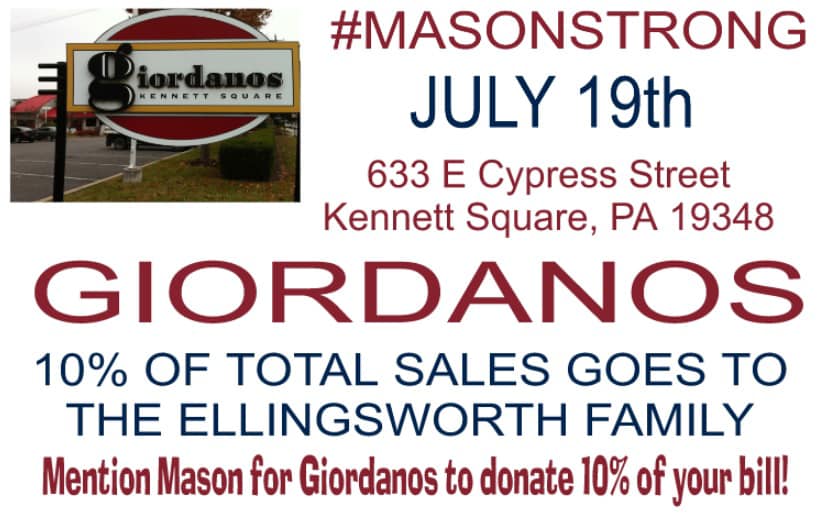 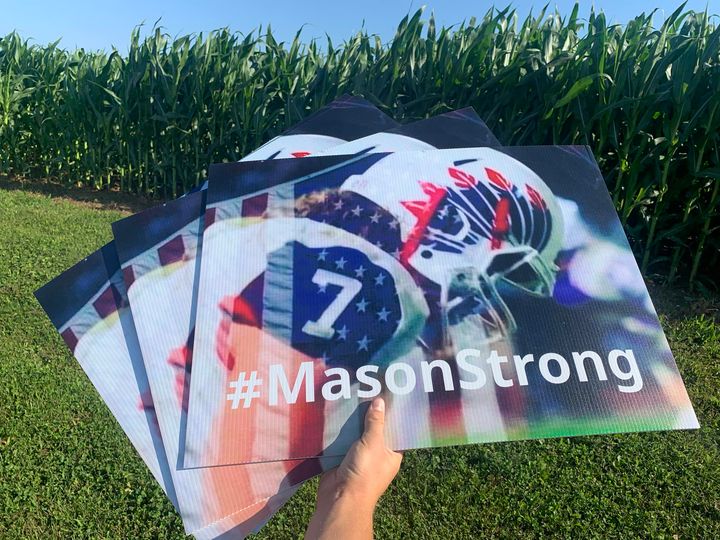 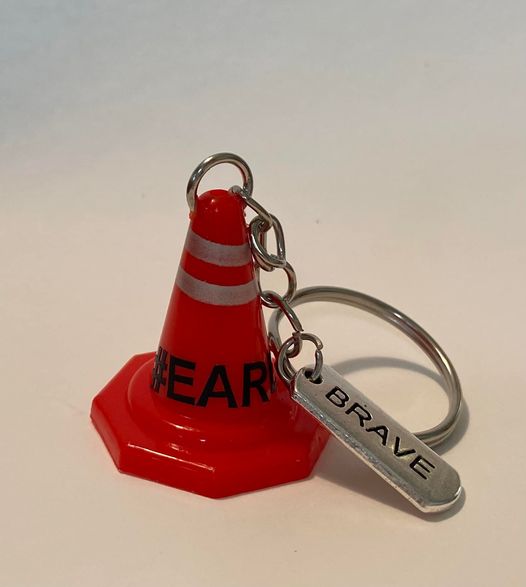 #Earl keychains   $10 each with all proceeds directly to the Ellingsworth Family.  Made/sold by Christy Walter Mendenhall.  Contact her on facebook via her name or the Our Fancy Flamingo business facebook page. 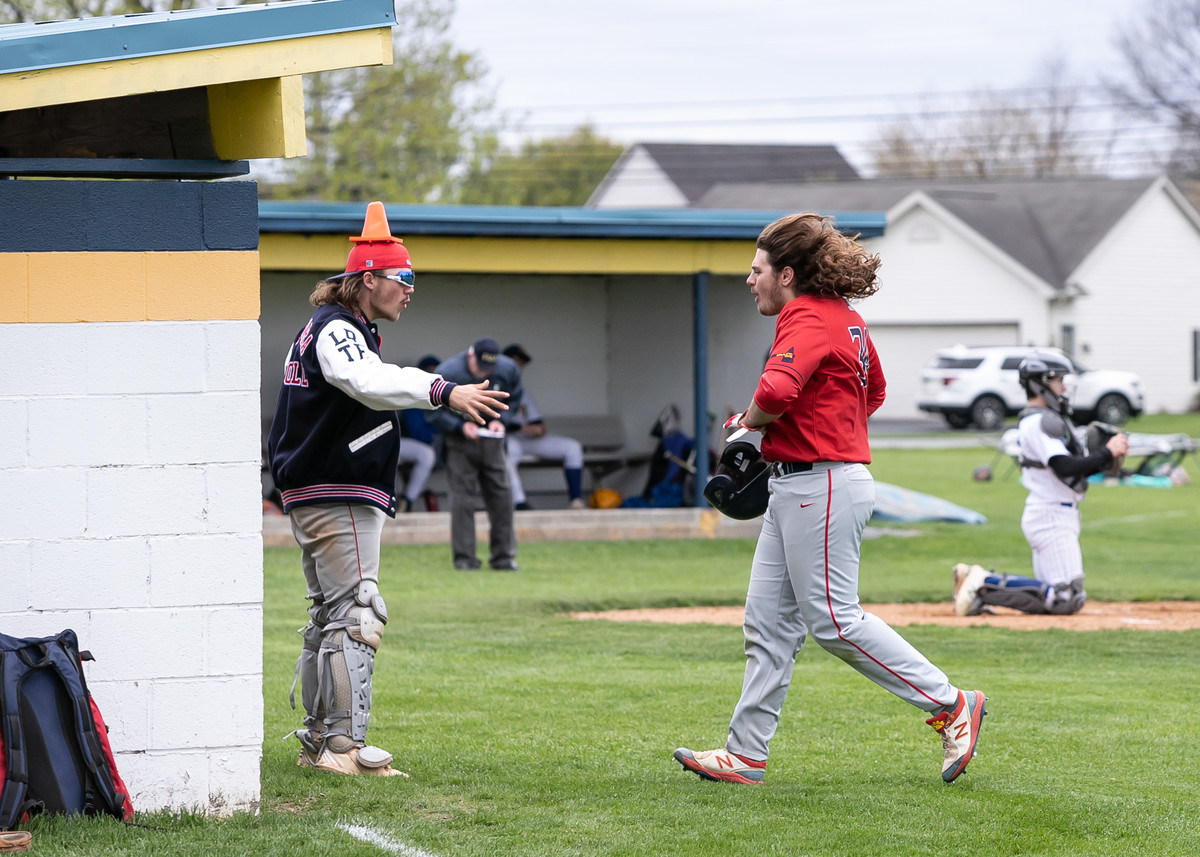 Read below for the story of Earl (as recalled by Shelli McKenna):

I'd like to tell you a story about a cone named Earl.

You see, Octorara baseball was playing a very COLD game at Northern Lebanon on April 27th. Only a handful of us parents made the trip and, let me tell you, we were ready for that game to wrap up because it was freezing.

It was the bottom of the 7th inning and we were down. I want to say it was 3-2, but I am not a good detail person when it comes to remembering those things. We were up to bat in the 7th and we look over at the dugout. There's Mason with his sunglasses on upside down & a traffic cone on his head. Now, it was a mini traffic cone, but yes, a traffic cone. We were like 'what the heck?!' LOL! I was thinking 'ok, rally hat, rally cone, whatever works'.......

Don't you know, Octorara rallied and ended up winning that game 9-3.

And the Legend of 'Earl' (as far as I know, Mason named him) was born.

Next, we played Kennett at home. Yes, Earl made his appearance & yes, once again they rallied in the 7th inning. Now, we were all invested in this 7th inning teammate named Earl and we are loving every minute of these unbelievable comeback wins.

The next game, vs. Garden Spot, it's the 5th inning and we're down again. I'm getting nervous. I go over to the dugout and Mason is sitting on a bucket. I'm like 'Mas, where's Earl?!'. He said 'Nope, Earl can't come out 'til the 7th inning!'. I was like, ok, I'm trusting you, kid.
I go back over to the fence to watch the end of this game and don't you know, of course I look over in the 7th and there's Mason and Earl. Yep, you guessed it, they won 4-3 in the bottom of the 7th (and mind you at least several of these come backs came with 2 outs, the boys liked to keep us on edge until the very last second!).

The 2022 Braves baseball team ended up with a 4 win streak all with comeback wins & 3 were walk offs, if I am remembering correctly. It was the most exciting baseball I think I've every watched. The entire team supported each other and they rallied.

During their playoff game, I looked over for Mason in the dugout in the 7th. No Earl. He saw me, and I motioned with a cone shape above my head & Mas shrugged his shoulders. I never did get a chance to ask him after that disappointing loss, but I assumed Earl had been lost somewhere in his travels.

That's why the moment I heard about Mason's accident the morning of June 1st, one of my first thoughts was 'Mason needs Earl!'. I think my boys thought I was crazy when I said that, but when Amanda had the same thought at the hospital and said he needed an Earl, you better believe a new Earl was purchased within moments and  has now taken up residence next to Mason's bed.

After reading Mason's Mom's update on day #4, I shed more tears. But these were happy tears. Some of the heaviness of my heart has been lifted and I feel like I can think a little more clearly, I can breathe. Mason is alive. Mason is awake. Mason is joking. That's Mason. Mason will rally because that's what we do. We love you, Mason Ellingsworth.

And that's my story of a rally cone named Earl. #MasonStrong #Earl #rallytime #Braves#7/#16 As most legends go, this is what I know and remember of Earl. Maybe one day soon Mason will add his insight on the origins of Earl.
Contact Us
© 2022 McKenna Moments Photography
**Please be aware that our social media accounts were hacked & disabled on 11/10/22.  We are working desperately to try to get them recovered.  We cannot receive any messages sent on social media.  Please text or email with the info from this website.  Thank you!**